Initially trained at the Collegium, the Bandit Wizard has abandoned his studies for the pursuit of gold. Unleashing magic bolts of lightning or explosive fireballs from their staffs.

The Bandit Wizard charges forward and attacks whoever he can reach. If there is a wounded enemy, he will use his Fireball skill to finish them off. 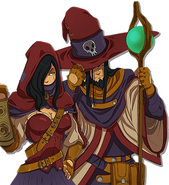 Add a photo to this gallery
Retrieved from "https://lionheart-tactics.fandom.com/wiki/Bandit_Wizard?oldid=11008"
Community content is available under CC-BY-SA unless otherwise noted.