Frost Crystals are stones but they look different from the one Ursus Runebinder summons as frost crystals have three metal rings around its center.

Frost crystal unlike most enemies cannot move, however with a range of 5 the frost crystal can attack. Frost crystals deal a fair amount of damage, however their attacks freeze units, making then unable to act for a turn. All crystals have a 50% resistance against bows. They are able to occasionally able fully block attacks. 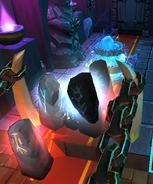 Add a photo to this gallery
Retrieved from "https://lionheart-tactics.fandom.com/wiki/Frost_Crystal?oldid=10898"
Community content is available under CC-BY-SA unless otherwise noted.