The Frost Queen is a unique enemy found in the 13th (Final) floor of the special event 'Holiday Village' dungeon in Hard mode.

A mage capable of wielding the spells of the cold ice, the Frozen Queen is an evil witch with ability to even imbue life into snow. With the help of Snow Jackals and her army of Snowmen, she threatens to ruin the wonder of winter.

The Frozen Queen doesn't like to spent her time attacking heroes, but instead she summons Snowmen to do the dirty work for her. She does have a good attack and never hesitates to counter attack if you happen to be in range. 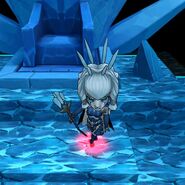 Frozen Queen Toon
Add a photo to this gallery
Retrieved from "https://lionheart-tactics.fandom.com/wiki/Frozen_Queen?oldid=8914"
Community content is available under CC-BY-SA unless otherwise noted.