With armour as heavy as any Guard's and strength that even the Barghest envy, the Halberdier is an unstoppable force.

The Halberdier is a real stunner...hehe..stunner..get me? Anyway, the only thing to mention is that you should use his skill first if you wish to focus-fire upon any enemy unit. That way, you could finish whats left without any mess.

A Sage's 'Haste' skill would work "very" well with this tank since not only could you stun an enemy for two turns, the extra movement would also grant him a better reach even with those massive armor.

The Halberdier has one of the highest attacks in the entire game and with his Power Strike, he can often one shot most units, and if lined up can kill 2 at once.

Due to his short movement rate, wait a turn for the enemy to get closer. Then with 'Protect' on him, send him forth. Also have two Dancers casting 'Dance' on him as back up. That's 3 attacks from him in 1 turn with one of his attacks being his Battle Skill: Power Strike. This will definitely devastate your enemies.

Due to his low magic, he is very vulnerable to magic attacks, so it is adviced that he targets magical units first. 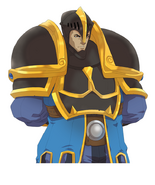 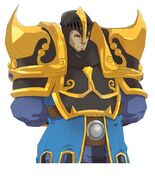