The Huntress deploys mighty arrows that can pierce through enemies, and deadly traps to hold them at bow's length.

Even though the Huntress may seem like a ranged unit, she actually prefers to join the brawls head on. Her passives like 'Berserk', 'Into the Fray' and 'Big Game Huntress' helps boosts her attack by more than 70%. To support this, she has a lot of health and defense compared to other ranged heroes.

Her trap skill can easily disable melee units and still hurt them from a safe distance. If you still want to play safe, that is. 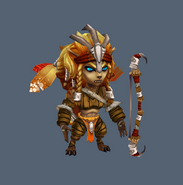 Add a photo to this gallery
Retrieved from "https://lionheart-tactics.fandom.com/wiki/Huntress?oldid=11889"
Community content is available under CC-BY-SA unless otherwise noted.