The Shop is where the most Heroes go to for their everyday needs. Few events offer discounts on the value of most packs in the shop, so try to stack up for such opportunities whenever possible.

Recruit new heroes to aid you in your quests. In the Store, various packs give out heroes of varying ranks and rarity. Few events double (or even triples) chances for a certain unit in the packs. It is recommended to wait for such events if you are trying your luck for Mythical heroes. You can always use the useless ones as fodder for your main team.

Wood hero packs are only available to new players and drops only Recruit Archer units. These Hero packs cost 200 coins.

For a little higher price of 6000 coins, one is able to buy Silver Hero pack which contains a random Recruit Uncommon or Rare Hero.

1000 crowns can be spent to purchase a Golden Hero pack containing a random Recruit Mythic Hero.

New items for you heroes to equip. Each pack contains a set of 5 items of ranks pertaining the Gear pack.

These packs contain items of Novice rank for the cost of 1600 coins.

These packs include equipment of Master rank or above (rarely includes Legendary items). This pack costs 10000 coins.

Stones are needed to promote your heroes to stronger ranks. Each stone pack contains 3 random stones (4 during special event)...with a small chance of King Stone (Of-course! How could I forget that?)

These packs are composed of three random Recruit rank stones to help promote heroes to Novice. This pack costs 800 coins.

These packs usually include Elite rank stones with small chance to drop Master and Champion ranked ones. This packs cost 17500 coins.

For 750 crowns, it is possible to buy Mythic Stones pack which give out Master rank stones along with a chance for Champion stones.

Crowns and coins can be used to purchase Heroes and Items. Crowns can be bought from vaults in various quantities for cash. Higher amounts of crowns come with more bonus crowns.

Coins can also be bought from the store using crowns 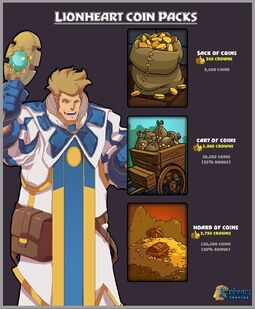 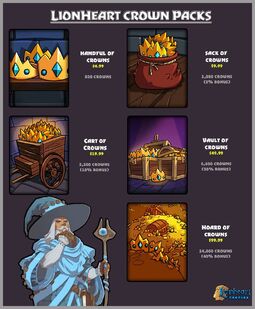 Add a photo to this gallery
Retrieved from "https://lionheart-tactics.fandom.com/wiki/Shop?oldid=12558"
Community content is available under CC-BY-SA unless otherwise noted.